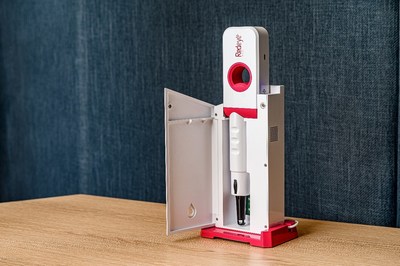 With optical sensing technology, users only need to put the handheld device in the water. The device will indicate the current situation of fecal occult blood through a red or green colored indicator on the device.

Influenced by living and eating habits, the incidence rate of colorectal cancer has been increasing year by year. There are more than one million new colorectal cancer cases in the world annually. More and more colorectal cancer cases are being diagnosed in younger patients. To help patients identify symptoms earlier, RedEye, a startup company, has launched the RedEye Heme Detection System that can be easily used at home, improving people's willingness to take the test due to its convenience.

RedEye pointed out that fecal occult blood is an early symptom of many diseases. If the blood is visible to the naked eye, the diseases have often progressed to the second or third stage, when patients need to have surgery or even additional chemotherapy. This will undoubtedly affect the patients' quality of life after treatment.

Despite the high incidence and difficulty in detecting it by patients themselves, people rarely take the initiative to do an immunochemical fecal occult blood test (iFOBT), according to statistics. In Taiwan, although the government provides people over 50 years with a free colorectal cancer screening every two years, only some people do the test. As a result, some people missed the opportunity to detect colorectal cancer early, which indirectly increased the mortality of colorectal cancer.

Built-in optical detection, can be completed within 10 seconds

It is very simple to use the RedEye Heme Detection System. With optical sensing technology, users only need to wait a moment while the feces softens, then put the handheld device in the water. After 10 seconds, the device will indicate the current situation of fecal occult blood through a red or green colored indicator on the device.

Based on the built-in noise database, the RedEye Heme Detection System can exclude heme from environmental impurities in the toilet water, providing results compatible with hospital iFOBT qualitative tests and allowing users to do preliminary screening quickly at home.

Through the RedEye app, which is now being developed, users will be able to send the test results to their mobile phones to keep a record and to observe any positive and negative trends. As the test is anonymous, the data will not be stored in the system, so there is no need to worry about privacy issues. The system can also be shared with the whole family.

The RedEye Heme Detection System consists of two parts: the handheld device is IPX7 waterproof with clip-on filter paper at the front end to filter impurities in the water. The other part is the water-repellent charging stand, which has two functions: UV sterilization and air drying. The device is simple and lightweight enough to fit anywhere in the bathroom.

Considering the possible high selling price, the RedEye Heme Detection System will first be offered to the elderly and users with a family medical history. At present, some inspection laboratories, nursing homes and insurance companies are now asking about cooperation through leases. RedEye is currently evaluating these requests.

Currently in market, there are products to detect occult blood at home. Typically, test strips are put into the toilet, but the environment easily influences the results and disposable test strips have a relatively high cost. In comparison, the RedEye Heme Detection System can operate for at least 5 years. The only consumable is the optical grade filter paper at the front of the device, which improves the acceptance and trust of users who want to do health monitoring at home.

RedEye has completed the first phase of a 50/50 clinical trial with National Taiwan University Hospital Hsin-Chu Branch, where the accuracy rate of the heme detection system reached 95%. The team expects to expand research plans in the future and is currently in discussion with hospitals like Chi Mei Medical Center, Chang Gung Memorial Hospital, Cathay General Hospital, Veterans General Hospital, etc.

In addition to a detection system similar, in form, to a home appliance, RedEye also plans to modularize the technology and cooperate with well-known toilet manufacturers in Taiwan and Japan to create a smart toilet, giving the public more choices.

Like most start-up companies, RedEye encountered many difficulties in the initial startup stage in 2017. Product development and design must integrate various aspects such as integration of optical structure and electronic software. In terms of fundraising, investors hesitated to invest in the beginning, but investors will take the initiative to approach RedEye now.

Just like sphygmomanometers and ear thermometers, RedEye hopes to make the heme sensing system a must-have product at home. They also plan to introduce extended products for different use scenarios in the future, such as the detection of drug use, bacterial infection or urine protein tests for kidney disease.

Dr. Neison Yan, the founder, says that the reason why he chose to develop the RedEye Heme Detection System was to help people notice disease early and get treatment early. He believes that the heme detection system will help patients save medical expenses while preserving a better quality of life.