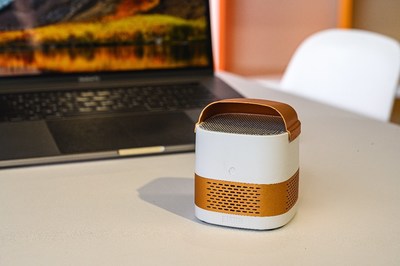 With the nano photocatalytic purification technology, the Luft Cube can effectively decompose and destroy harmful substances and allergens such as molds, bacteria, pollen, PM 2.5 organic compounds, and bioaerosols.

Titus Chang, the co-founder and marketing director of LuftQi, has previously worked in the LED industry. He saw that there was a lack of local brands in Taiwan's LED industry, and with the pressure exerted by China's LED policies in recent years, he decided to start a new company, LuftQi. Among the three basic necessities of life -- air, sunlight and water, LuftQi is dedicated to "air." Interestingly, the word "luft" means "air" in German. The name reflects the company's mission to improve air quality and health with its experience in LED technology.

According to relevant statistics, Titus Chang points out that driven by global urbanization, one-eighth of the world's population will be concentrated in 33 megacities by 2030. The air quality in these cities will inevitably deteriorate due to overpopulation. The WHO statistics also indicate that air pollution and allergens account for approximately 7 million deaths each year. That is why LuftQi is committed to solving the air pollution and respiratory health conundrum.

After six crowdfunding efforts, LuftQi has made six major improvements to the original PoC verified product, ultimately launching the Luft Cube mini air purifier. The Luft Cube is claimed as the most lightweight, non-consumable air purifier on the market. It is also the first model to employ nanotechnology. With the nano photocatalytic purification technology, the Luft Cube can effectively decompose and destroy harmful substances and allergens such as molds, bacteria, pollen, PM 2.5 organic compounds, and bioaerosols. The Luft Cube does not require a filter, which reduces replacement costs and prevents secondary pollution. Also, with a power consumption of only 2.5W, the Luft Cube is extremely energy conserving in the long run.

Striving to make further advancements, LuftQi is currently developing a new special photocatalytic technology. Titus Chang mentioned that the sterilization and decomposition efficiency of the new product will be doubled. A sensor will also be installed for data collection and even big data analysis. New value-added services and a subscription business model will be launched in accompaniment.