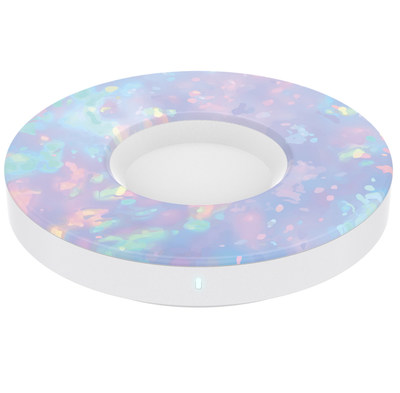 LAS VEGAS, Jan. 7, 2020 /PRNewswire/ -- Consumer Electronics Show -- PopSockets is thrilled to announce the launch of its latest lifestyle technology product, the PopPower Home Charger, at the 2020 Consumer Electronics Show. The best-performing Qi-certified wireless charger on the market, PopPower uses technology developed by NuCurrent, the leader in wireless power innovation. PopPower is designed to optimize charging with a PopGrip on your phone, and is the only charger on the market that is capable of charging through both a PopGrip and a thick phone case. The recessed center perfectly aligns with your grip for fast, simple, charging and comes in three chic styles - Matte White, Mountainscape and Cosmic Cloud.

PopPower is a Qi certified charger, which means it is compatible with all Qi certified devices. The charger supports the Qi standard's new Extended Power Profile (EPP), which enables continuous delivery of up to 15 watts of wireless power. PopPower is ready for next-generation fast charging mobile devices and is three times more powerful than standard chargers on the market.  It also supports proprietary fast-charging modes from Apple and Samsung.

PopPower simplifies charging for PopGrip users so you can charge up and go effortlessly. It works with any non-metallic PopGrips and is available on www.popsockets.com for $60.

About PopSockets
PopSockets was founded in 2010 by former philosophy professor David Barnett. Barnett was looking for a way to prevent his earbud cord from getting tangled, and he glued two buttons to the back of his phone and wrapped them around the buttons. In 2014, PopSockets was launched out of his garage in Boulder, Colorado and today has offices in Boulder, San Francisco, Hong Kong and Helsinki. More than 165 million PopSockets grips have been sold around the world. PopSockets exists to change the world for the better with innovative, magical products and community empowered activism. Products include the PopGrip, PopTop, PopWallet, PopThirst and PopMirror, all designed to increase the functionality of devices we use daily. In the fall of 2018, PopSockets premiered the Poptivism program—a charitable giving platform where customers create their own PopGrip designs and PopSockets donates 50% of the sale price to the customer's charity of choice. The brand has donated over $3 million dollars in cash and product to 300 nonprofit partners.

About NuCurrent
NuCurrent supplies Fortune 1000 companies and other high-potential product developers with wireless power technologies and sub-systems. Our core technologies span magnetics, software and systems simulation and have generated over 90 patents granted or pending globally. Our broad systems integration expertise supports manufacturers of appliances, smartphones, wearables, hearables, consumer electronics, medical devices, robotics, IoT, sporting equipment and other emerging product categories. NuCurrent solutions are based on inductive wireless power transfer which offers convenience, safety, efficiency, and great user experience. Founded in 2009, we are a venture-backed company based in Chicago with offices in Hong Kong and San Diego. More information at www.nucurrent.com.