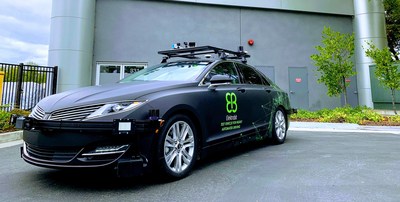 Quantum is teaming with Elektrobit to demonstrate how EB Assist Test Lab cloud-based validation tool combines with Quantum’s R-Series removable storage to capture data in an autonomous test vehicle. The team will drive a test vehicle from San Jose to CES in Las Vegas, collecting real-world data along the way, and downloading data to a StorNext appliance for ingest and management.

Quantum has teamed with Elektrobit to conduct a first-of-its-kind in-vehicle autonomous research data capture and management demonstration at CES. The team will drive a test vehicle cross-country from San Jose to Las Vegas, collecting real-world video and raw sensor data along the way using Elektrobit's EB Assist Test Lab combined with Quantum's R-Series removable storage to capture data in the vehicle, and Xcellis® Workflow Director appliances powered by StorNext® to ingest and direct files to the Elektrobit EB Assist Test Lab cloud-based validation tool, all on site. With this unique approach, engineers gain the ability to capture, ingest, and manage large amounts of data in a manner that is powerful, flexible, and cost-effective for a hybrid cloud-based solution.

"Delivering confidence in vehicle safety and design begins with capturing real-world test data, and ADAS and autonomous vehicle development generates a staggering volume of data," said Graham Cousens, ADAS/autonomous vehicle solutions practice leader, Quantum.  "Autonomous research also has unique workflow requirements, from capturing, processing, analyzing the data, and storing and retaining it. By demonstrating this workflow at CES we aim to show how this complexity can be intelligently managed, even in the chaos of Las Vegas."

Enabling an Efficient Automotive Testing Workflow
EB Assist Test Lab provides engineers with a tool to manage petabytes of driving-scene data generated in real and simulated test drives. The EB Assist Test Lab enables engineers to annotate data and define its level of critical importance as it's being captured.  Using a touchscreen interface, a driver tags user-defined events, such as roadway signs, pedestrians, hazards, wildlife, or other impediments, as they're encountered. Automated tagging is also available. These events are tagged with metadata that flags them for prioritized analysis.

Test data is captured on the ruggedized Quantum R-Series in-vehicle data storage system, along with the corresponding metadata. Once the Quantum R-Series magazine is removed from the test vehicle and placed into the StorNext solution in the test facility data center, the data is ingested. StorNext recognizes the metadata on the R-Series device and captures the data prioritization. StorNext then directs the data to the appropriate storage tier as defined by the customer.

High-priority data may be directed to an on-premise high-performance tier utilized for Hardware in the Loop (HIL) testing, while other data may be directed to a secondary tier, such as object storage, tape, or S3 cloud for cloud-based analytics and long-term backup and retention. This data workflow solution is highly efficient and cost-effective because data is identified and moved to the appropriate storage tier upon capture and ingest. This helps prevent customers from spending time and valuable resources on managing low-priority data on high-performance, higher cost tiers.

About CES
CES is the world's gathering place for the business of consumer technologies. Owned and produced by the Consumer Technology Association (CTA), it attracts the world's business leaders and pioneering thinkers.

Photo Link:  http://bit.ly/elektrobit
Photo Caption: Quantum is teaming with Elektrobit to demonstrate how EB Assist Test Lab cloud-based validation tool combines with Quantum's R-Series removable storage to capture data in an autonomous test vehicle. The team will drive a test vehicle from San Jose to CES in Las Vegas, collecting real-world data along the way, and downloading data to a StorNext appliance for ingest and management.

About Quantum
Quantum technology and services help customers capture, create and share digital content – and preserve and protect it for decades.  With solutions built for every stage of the data lifecycle, Quantum's platforms provide the fastest performance for high-resolution video, images, and industrial IoT.  That's why the world's leading entertainment companies, sports franchises, researchers, government agencies, enterprises, and cloud providers are making the world happier, safer, and smarter on Quantum.  See how at www.quantum.com.

Quantum and the Quantum logo, StorNext and Xcellis are either registered trademarks or trademarks of Quantum Corporation and its affiliates in the United States and/or other countries. All other trademarks are the property of their respective owners.