SEATTLE, Jan. 7, 2018 /PRNewswire/ -- PicoBrew, maker of the world's first line of craft beer brewing appliances, introduces PicoStill today at CES© 2018, the first-of-its-kind, patent-pending, distilling device that now makes it possible for any homebrewer or professional brewer to create their own essential hop oils to enhance the aromas and unique flavors of beer. Licensed and properly permitted craft distillers or individuals can also use the PicoStill to produce a wide range of alcohols. PicoStill is one of several new devices PicoBrew is introducing at CES that have turned their line of craft beer appliances into a full countertop brewery and the ultimate kitchen appliance. 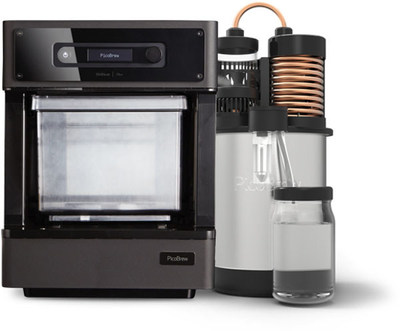 "PicoStill is an exciting next step for us," said Dr. Bill Mitchell, CEO, PicoBrew.  "We love offering new ways for our Pico owners to experiment and create great tasting beer that they can offer their customers or serve to their friends and family."

CES attendees will be among the first to see the PicoStill at CES Unveiled, Table #51, and throughout the show at Booth #40125 in the Sands Expo at Tech West (Smart Home Section). Samples of refreshing Pico-brewed craft beer from their award-winning brewery partners will be served all day, every day during the show.

PicoStill incorporates the most precise temperature control and safest technology to make distillation both simple and safe. PicoStill is a modern-day vacuum still that mitigates inherently dangerous situations produced when alcohol vapors are near open flames or other sources of ignition by using indirect heating sources and operating under vacuum to reduce temperatures and prevent flammable vapor leaks. It also incorporates patent-pending mechanisms to make distillation even safer, such as heating that shuts off automatically if the vacuum seal is broken and a custom methanol collection chamber to automatically isolate congeners.

"By developing technology that automatically separates the methanol from the heads, we have significantly reduced the dangers inherent in distilling spirits," added Mitchell. "The PicoStill provides commercial distillers a versatile, safe, and easy to use small batch distilling solution."

PicoStill comes with both a polished copper distilling column and clear glass infusion chamber that is crucial for essential oil extraction and designing flavored spirits. Water-extraction hop oils can be produced in less than an hour, and infused into the beer, compared to dry hopping which can take up to a week. In addition to hops, PicoStill can also distill water, herbs, spices, grains and more.

PicoStill is compatible with all of PicoBrew's line of Pico brewing appliances and it is currently available for pre-order at the discount price of $249. PicoStill MSRP: $349.

"Anyone who has ever homebrewed is aware of the significant investment in time and money that goes into home brewing," offered Mitchell. "The Pico C features technology and new accessories that solve the most common issues that stand in the way of making great beer at home, opening the door for anyone to be part of the craft beer making community."

The Pico Model C features a completely reimagined 2-piece brewing keg that has a simplified hose connection and is dishwasher-safe. The PicoFerm, a new Wi-Fi connected smart fermentation device, attaches to the Pico Model C keg and uses patent-pending technology to closely monitor the fermentation progress until the exact time the beer is ready to carbonate and drink. PicoFerm monitors a variety of factors, including temperature and pressure inside the keg, to accurately predict fermentation progress and sends alerts to correct variables that might prevent the user from getting the perfect result. For data geeks, users can also track their brewing progress, plus see a detailed report of their fermentation progress, through the BrewHouse portal on PicoBrew.com.

Over 100 Recipes from Award-Winning Breweries

Pico uses compostable PicoPaks, which contain the fresh, pre-measured hops and grains needed to brew fresh, brewery-quality craft beer every time. With the push of a button, Pico Model C recognizes the PicoPak inserted and follows brewing process instructions transmitted over a home Wi-Fi connection. Pico Model C brews five liters of craft beer in about two hours. Beer is then fermented and carbonated, and in 7-14 days it is ready to chill and serve!

Pico users can now select from over 100 PicoPaks from award-winning craft breweries all over the world including the US, Germany, Belgium, Canada, Italy, and Central and South America. For those who want more customization, users can build a custom PicoPak using the online Freestyle tool in the BrewMarketplace. Pico Model C users can also brew Kombucha.

PicoBrew, and its line of brewery appliances have been recipients of numerous awards over the years including being named among Fast Company's The World's 50 Most Innovative Companies in 2017 and CES Innovation Awards Honoree for Eco-Design and Sustainable Technologies in 2017 and Home Appliances in 2016.

For additional images, video and information, go to http://ces.vporoom.com/Picobrew.

PicoBrew was founded in Seattle in 2010 by brothers Bill and Jim Mitchell, a former Microsoft executive and food scientist, along with engineer Avi Geiger.  Combining their food science and technology expertise with their passion for homebrewing, they set out to improve the craft beer brewing process for small producers and homebrewers. PicoBrew introduced its flagship product, the award-winning Zymatic® automatic beer-brewing appliance for beer brewing professionals and homebrewers, in 2013. The Pico™, designed for consumer craft beer enthusiasts, followed in 2016. Both product lines are designed to improve the precision, repeatability and overall quality of the brewing process to create consistently delicious craft beer. For more information, visit www.picobrew.com or follow PicoBrew on Facebook, Twitter or Instagram. 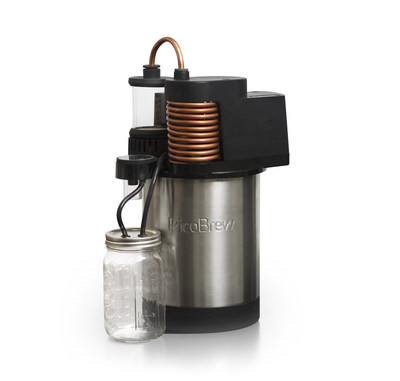