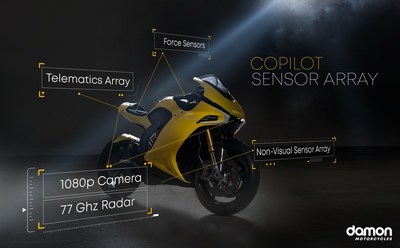 As part of the agreement, Damon has licensed BlackBerry QNX technology, including its industry-leading real-time operating system to serve as the safe and secure foundation for the Damon CoPilot warning system on its new flagship electric motorcycle.

Damon will unveil this disruptive, limited edition superbike, the Hypersport Pro™, and open reservations to the public online and at CES at 10:00am PST, January 7th. In BlackBerry's booth, attendees will also be able to experience Damon's next generation motorcycle first-hand in the #FutureOfMotorcycling Interactive Experience, a rideable, leaning stationary motorcycle that uses virtual reality to showcase the motorcycle's unique features on the show floor. These features include its powerful all-electric performance, its CoPilot advanced warning system, and Shift™, its patented rider ergonomics that lets riders electronically adjust the Hypersport's riding position while in motion. CoPilot uses radar, cameras and non-visual sensors to track the speed, direction and velocity of moving objects around the motorcycle. Attendees can book a time slot to experience it at CES by visiting damonmotorcycles.com/VR.

"We're on a mission to unleash the full potential of personal mobility for the world's commuters," said Jay Giraud, Chief Executive Officer of Damon Motorcycles. "To address this, we spent the last three years developing an AI-powered, fully connected, e-motorcycle platform that incorporates CoPilot, our proprietary 360º warning system. By building it on BlackBerry's best-in-class technology that is safety certified, Damon motorcycles will be the safest, most advanced electric motorcycle in the market."

"With its advanced collision warning system, Damon's new Hypersport Pro is a game-changing model for the motorcycle industry," said Grant Courville, VP, Product Management and Strategy, BlackBerry QNX. "We're absolutely thrilled to have them in our booth and look forward to showing off the highly-secure software that delivers enhanced situational awareness and increased peace of mind for riders. BlackBerry QNX is leading the way in next-generation mobility systems by providing a safe and secure platform for connected vehicles and beyond and we're proud to work with Damon on this exciting advancement."

BlackBerry QNX is a leader in delivering trusted embedded operating systems and development tools to companies for which failure is not an option. Committed to the highest safety, reliability and security standards, BlackBerry QNX has developed a portfolio of software and services with a proven record of helping developers deliver complex and connected next generation products. BlackBerry QNX technology is trusted in over 150 million vehicles and millions of embedded systems, including medical, industrial automation, robotics, energy, defense and aerospace applications. For more information on BlackBerry QNX, please visit blackberry.qnx.com.

With performance specs to be released at CES 2020, Damon's industry-leading advanced prototypes are set to hit the roads in mid-2020 to the world's largest mobility segment well overdue for a safer, smarter, zero emission solution. For more information on Damon Motorcycles, please visit damonmotorcycles.com.

About Damon Motors Inc.
Damon is unleashing the full potential of personal mobility for the world's commuters. With its proprietary electric drivetrain, the company has developed the world's safest, smartest, fully connected electric motorcycle employing sensor fusion, robotics and AI. Designed as a platform for worldwide line extension, Damon motorcycles will ship direct to consumer on subscription plans to drive scale. Based in Vancouver, Canada, Damon is a Techstars Mobility company founded by serial entrepreneurs Jay Giraud and Dom Kwong. Damon's investors include Round 13 Capital, Techstars, Fontinalis, Extreme Venture Partners and Pallasite Ventures.

About BlackBerry
BlackBerry (NYSE: BB; TSX: BB) is a trusted security software and services company that provides enterprises and governments with the technology they need to secure the Internet of Things. Based in Waterloo, Ontario, the company is unwavering in its commitment to safety, cybersecurity and data privacy, and leads in key areas such as artificial intelligence, endpoint security and management, encryption and embedded systems. For more information, visit BlackBerry.com and follow @BlackBerry.