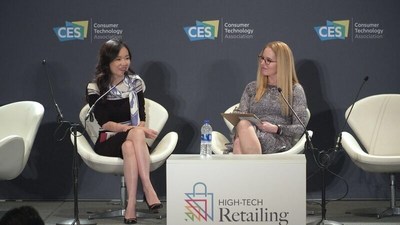 "In China, forgetting your wallet as you walk out the door is no longer a problem, because you don't need it at all," said Cecilia.

To understand this sentiment and Tencent's smart retail concept, one must first understand WeChat.

This is a mobile instant messaging software that is better, more powerful, and more in line with Chinese people's usage habits than anything that has come before. WeChat's Moments function is like a personal blog or wall. Users can express themselves and see content posted by their friends through their Moments feed.

"Moments advertising is one of the most direct applications of Tencent's smart retail," said Cecilia. "BMW, Hermes, Givenchy, Wal-Mart, and many other international brands have advertised through Moments. The feedback shows that this method of advertising has a very clear effect in promoting sales."

Unlike messaging apps which are used on a daily basis, in addition to instant messaging, voice and video calls, file sharing, and the Moments function, WeChat can also be used as a digital wallet to pay for items instantly at the checkout and online.

"Well over one billion people are now using WeChat, and WeChat Pay has more than 800 million monthly users," Cecilia said. "It's hard to find an app which is so widely used in everyday life in any other country in the world. Whether it's in supermarkets, hospitals, shopping malls, restaurants, train stations, or airports, even on taxis and buses, you can use WeChat to pay your bill no matter where you are."

This amazing feature has been tapped-into by many retailers, giving birth to a new mode of selling, Online Social Stores.

In a cooperation between Tencent and a name-brand cosmetics retailer, consumers have begun to explore new modes of shopping. First, they come to the physical store to try a variety of cosmetics and make-up products. After leaving the store, they then keep in touch with the store associates via chat through WeChat for Work to continue to make purchases, allowing consumers to get the products they often use delivered directly to their door. When the store has a new product, the merchant can send a notification to their regular customers via WeChat as a way to promote new sales.

"Users often introduce their friends to the shopping group through WeChat, and the sales staff can find new customers," said Cecilia.

In addition to its customer attraction and traffic directing capabilities, WeChat has another exciting feature. Mini Programs are small apps built into the WeChat environment, which provide merchants with more service functions that they can use to develop further forms of interaction which suit their own needs.

"At present, Tencent Smart Retail has cooperated with leaders from many retail verticals to carry out a series of experimental retail transformations," Cecilia said. "An in-store ordering Mini Program that McDonald's is using is a good example. Users can scan a QR Code at McDonald's stores, and complete their order through the Mini Program, eliminating the queueing process. At the same time, McDonald's can also distribute its discount vouchers and promotional information through the Mini Program, which offers great savings on marketing costs."

Cecilia also gave another example of an in-store sales scenario.

"For many large supermarkets, the worst part of their customers' experience is at the checkout. During peak hours or holidays, checkout queues are often long, but in Chinese Wal-Mart branches customers can simply use the Mini Program to scan the barcode on items in store and complete the purchase on their phone using WeChat Pay. There is no need to pay at the checkout anymore."

According to Cecilia, this type of shopping can increase store efficiency by 60% and significantly reduce employee workload. At present, the WeChat Mini Program is being used in over 400 Wal-Mart stores in more than 180 cities in China.

Tencent's concept of smart retail does not stop here.

In addition to placing orders and paying through mobile phones, in cooperation with JACK&JONES and VERO MODA from the BESTSELLER fashion group, Tencent has further enhanced in-store user interaction via social experiences through a Mini Program called The Look Battle.

The Look Battle uses a competition and reward system of gameplay to attract new online users and later convert them into making offline sales. While trying on clothes in the digital stores of BESTSELLER brands, customers can take photos through the Mini Program and compete with their WeChat friends for who has the best look, enhancing the users' interactive experience. At the same time, the Mini Program can also use AI to recommend different looks for the user and complete virtual look changes.

This product leverages capabilities from Tencent Pitu Everyday (an easy to use photo-editing app), Tencent Youtu (an AI platform which provides visual recognition capabilities to businesses), and WeChat Pay.

"We are trying to become another option for the retail industry," said Cecilia, and they hope to bring something different to traditional retailers through Tencent's strength and experience in a wide range of fields.

Yonghui, one of China's largest supermarket chains, turned one of its chains of hypermarkets, Super Species in Shanghai, into a classic film experience store which successfully blurred the borders of the oriental visual aesthetic of Zhang Yimou's new film "Shadow" and the retail environment.

Lawson, the convenience stores company, teamed up with Tencent's QQ Speed mobile game to create the first in-depth cooperation between retail and gaming. In the game, players can see Lawson's virtual store, and get discounts and limited-edition clothing. In the real world, during the promotion period, in-game items and discounts can be obtained by purchasing designated Lawson items at Lawson convenience stores in designated cities.

As China's largest social application Internet company, Tencent is using its strong customer base technology to gradually penetrate all aspects of traditional retail. In addition to advertising, customer management, and interactive applications inside and outside the store, Tencent Smart Retail also cooperates with Chinese retailers in the supply chain, warehousing, procurement and other aspects, gradually becoming a new choice in the internet transformation of the traditional retail industry.