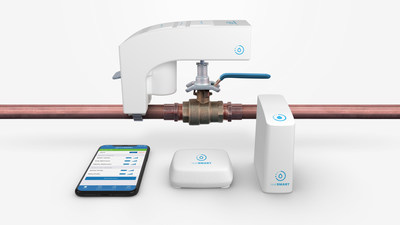 Automation Device of the Year

LeakSmart®, the world’s most intelligent leak and flood protection system for the home, has been named winner of the Automation Device of the Year as part of the 2019 TechHome Mark of Excellence Awards at CES 2019 in Las Vegas, the world’s largest technology trade show.

BEDFORD HEIGHTS, Ohio, Jan. 15, 2019 /PRNewswire/ -- LeakSmart®, the world's most intelligent leak and flood protection system for the home, has been named winner of the Automation Device of the Year as part of the 2019 TechHome Mark of Excellence Awards at CES 2019 in Las Vegas, the world's largest technology trade show. Delivered by the Consumer Technology Association (CTA), the organizer of CES, and CE Pro, a leading home technology trade publication, the Mark of Excellence Awards recognize groundbreaking residential custom installation projects performed by professional integrators as well as consumer technology products and services that are primarily targeted at the custom installation channel.

Thousands of homeowners have prevented costly water damage to their homes by installing a LeakSmart system. In 2018, LeakSmart introduced the Snap, a shut-off valve control that installs in seconds without any tools or the need to cut into the main water supply line, and the Hub 3.0, which extends water damage protection even during power outages and downed Wi-Fi.

"At LeakSmart, we are on a mission to protect every home and family from catastrophic water damage caused by devastating leaks and floods," said Larry Waxman, CEO of Waxman Industries, parent company of LeakSmart. "We are proud that LeakSmart was named the Automation Device of the Year during the TechHome mark of Excellence Awards as given by CTA and CE Pro at this year's CES show."

LeakSmart was also named a CEDIA Best in Show winner in September 2018 by Residential Systems and TWICE magazines.

LeakSmart is the world's most intelligent and reliable leak & flood protection system for your home. It detects water leaks instantly, automatically shuts off a home's main water supply in five seconds or less to prevent any further damage and notifies homeowners immediately.

Whether on its own or integrated into an existing smart home system like Nest, LeakSmart makes it easy for homeowners to protect their entire home from water damage 24/7, even if internet and power go out.

Developed by a team with over 85 years of plumbing manufacturing experience, LeakSmart allows homeowners to relax knowing that if there's a leak, they've got the best defense against potentially catastrophic water damage. To learn more, visit us at www.leaksmart.com.